Attorneys with you, every step of the way

Count on our vetted network of attorneys for guidance — no hourly charges, no office visits.

The myth that 75% of all mergers fail has long been dispelled. It was based on a statistic related to announcement day effect that failed to capture the reality of corporate value creation. Research shows that M&A does work to boost companies’ growth and value, but the bet-the-company deal isn’t the route to success. Indeed, infrequent large deals do tend to hurt value creation. Instead, it is a steady stream of transactions — known as programmatic M&A — that delivers the real wins. But these transactions need to reach particular thresholds of frequency and cumulative value to make a real impact.

The myth that 75% of all mergers fail has long been dispelled. It was based on a statistic related to announcement day effect that failed to capture the reality of corporate value creation. M&A does boost companies’ growth and value, our new research shows, but the bet-the-company deal isn’t the route to success. Indeed, infrequent large deals do tend to hurt value creation. Instead, it is a steady stream of transactions — known as programmatic M&A — that delivers the real wins. But these transactions need to reach particular thresholds of frequency and cumulative value to make a real impact.

This is one of the findings from a recently completed study based on publicly available information on the world’s 2,393 largest corporations for the time period 2010–2014. By examining dozens of variables, we found the levers that explain more than 80% of the up-drift and down-drift on what we have dubbed the “power curve” of corporate performance. Mergers, acquisitions, and divestitures make up one of those variables, provided they average at least one deal per year in a program that cumulatively amounts to more than 30% of a company’s market capitalization over 10 years, with no single deal being more than 30% of market cap.

Several companies we studied show the value of programmatic M&A strategies. Take marketing giant WPP. In the early days, following the company’s pivot from industrial manufacturing to marketing services, major acquisitions were the fastest way for it to achieve scale in its new industry. So WPP acquired the ad agencies J. Walter Thompson Company for $566 million in 1987 and Ogilvy for $864 million in 1989  — big acquisitions that stretched the company’s balance sheet. After that, however, WPP practiced programmatic M&A, turning it into a strong muscle. Our data shows that from 2004 to 2014, WPP made a staggering 271 acquisitions — which averages to more than one every two weeks — 60% more than the next busiest acquirer during that decade, Google (now Alphabet). WPP began the period in the middle of the pack, with an average economic profit of $8 million, but ended with a top-quintile-worthy $677 million and saw an 11% compound annual growth rate (CAGR) in total shareholder return over the decade.

Axel Springer followed a similar path. The giant German publisher made a decisive move from print to digital by making 67 mostly small acquisitions from 2006 to 2012, while launching 90 publications organically and divesting eight. The company’s disciplined approach to M&A repositioned it solidly for the digital age and led to a 10% CAGR in total shareholder return over the decade.

Programmatic M&A alone is rarely enough, however, to vault a company up the corporate charts. The real magic happens when an M&A program is combined with more of the five big moves we identified as key levers of performance. But, as with M&A, just pulling these levers does not help; you need to pull them hard enough to create impact. The four levers aside from M&A are:

For companies that start in the middle quintiles of corporate performance, we found, pulling one or two of these levers more than doubles their odds of rising into the top quintile, from 8% to 17%. Three big moves boost these odds to 47%. Companies that made three or more big moves were six times as likely to jump from the middle quintile to the top.

Corning is an example of a company that, during the period we studied, pulled all of the five levers and leaped from the bottom to the top quintile of the power curve. It sought to maintain a strong M&A pipeline that was about five to 10 times its annual target for increasing revenue through acquisitions. The management understood that doing three deals a year meant they had to do due diligence on 20 companies and submit five bids. Corning spent a net $3.2 billion on 12 acquisitions and divested nine businesses, but it also spent $14 billion on capital expenditure, boosted its sales productivity by 80%, expanded its gross margin by 14%, and saw the ratio of selling, general and administrative expenses to sales fall by 30%.

To understand the cumulative power of big moves, consider the experience of Precision Castparts Corporation (PCC), a manufacturer of complex metal components and products for the aerospace, power, and industrial markets. In 2004 PCC was in a poor position. Its revenues and debt levels were in the middle of the pack, and the company had not invested heavily in R&D — the three factors that represent a company’s endowment. In terms of trends, its geographic exposure was also unimpressive, but the aerospace industry experienced enormous tailwinds over the subsequent years, which helped PCC a lot.

Most important, PCC made big moves, surpassing the thresholds on four of the five levers. For mergers, acquisitions, and divestments, PCC combined a high value and volume of deals over the decade through a deliberate and regular program of transactions in the aerospace and power markets. This was a steady diet of transactions, not one-off binges. The last two years of our study were typical of PCC’s actions through the decade. In 2013 PCC acquired Permaswage SAS, a manufacturer of aerospace fluid fittings, for $600 million and divested its Primus Composites business. This was followed by the acquisition of Aerospace Dynamics, an operator of high-speed machining centers, for $625 million in 2014, or roughly 2% of PCC’s market capitalization.

In addition, PCC reallocated 61% of its capital spending among its three major divisions, while managing the rare double feat of both productivity and margin improvements. While nearly doubling its labor productivity, PCC managed to reduce its overhead ratio by three percentage points. It lifted its gross profit-to-sales ratio from 27% to 35%. The rewards for shareholders were obvious: 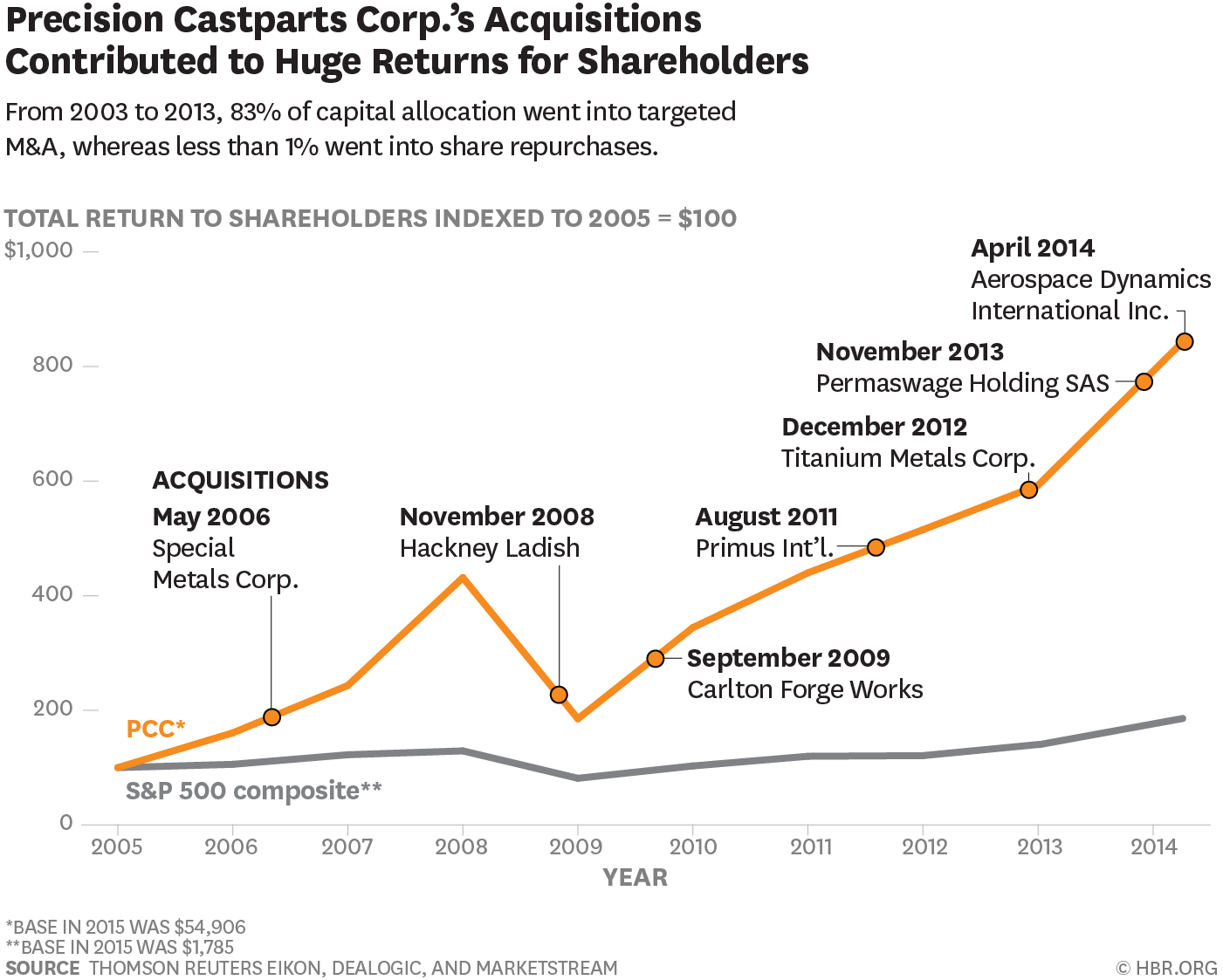 M&A and post-merger integration programs are not innate talents; mastery is only acquired by doing them over and over again. Our research proves that M&A is an important lever in corporate strategy, as long as it’s pulled strongly enough and in the right way.